This project consists of substantial additions to the rear of an inter-war bungalow – one of a set of five heritage listed houses, located at the end of a cul-de-sac, in the inner-western Sydney suburb of Croydon. The owner loved the existing bungalow, but felt that the cramped living spaces did not meet his needs, and did not take advantage of the backyard and the protected northerly aspect.

Our position, from the start, was that we should leave the existing bungalow intact and add a new and overtly contemporary living/ dining/ kitchen + bathroom/ laundry space to the rear. Our inspiration came from the existing fibro lean-to kitchen and veranda at the rear of the house. We lifted the roof to catch the ample winter sun and formed a new expanded, rethought fibro addition. Frank, our client was very supportive, as was our heritage consultant, John Oultram. Burwood Council’s rather ill-informed heritage consultant, consumed by a backward view of heritage conservation, insisted that the rear addition, which is not seen from the street, be detailed to match the existing house. This was in contravention of the ICOMOS Burra Charter, and went against the grain. We feel very strongly, that in order to respect a heritage building, new work should be overtly new, not a poor imitation of the past. Consequently we argued our case with Council, and eventually succeeded in having the project approved as per our original submission.

Simple principles of passive solar design are employed – hot summer sun is excluded from the interior by the deep north facing roof overhang, while warming winter sun is invited deep into the living space by the roof that tips up to the north. The dark vitrified tiled floor absorbs the winter sun – making the interior comfortably warm with minimal use of active heating systems. An otherwise slick white interior is tempered by the use of timber panelled joinery and primary coloured niches in the kitchen island-bench and splash back. The owner, our client, did a remarkable job in building the project himself, with the help of a great team of tradesmen. 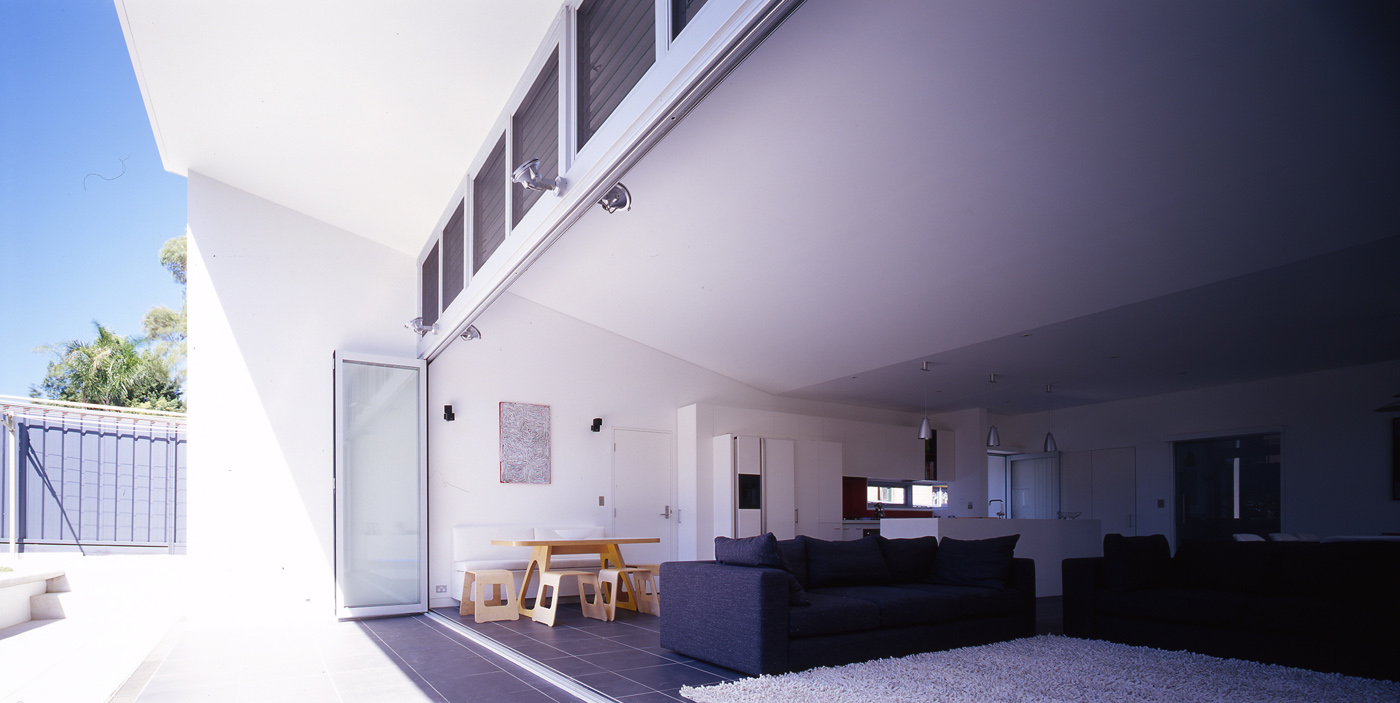 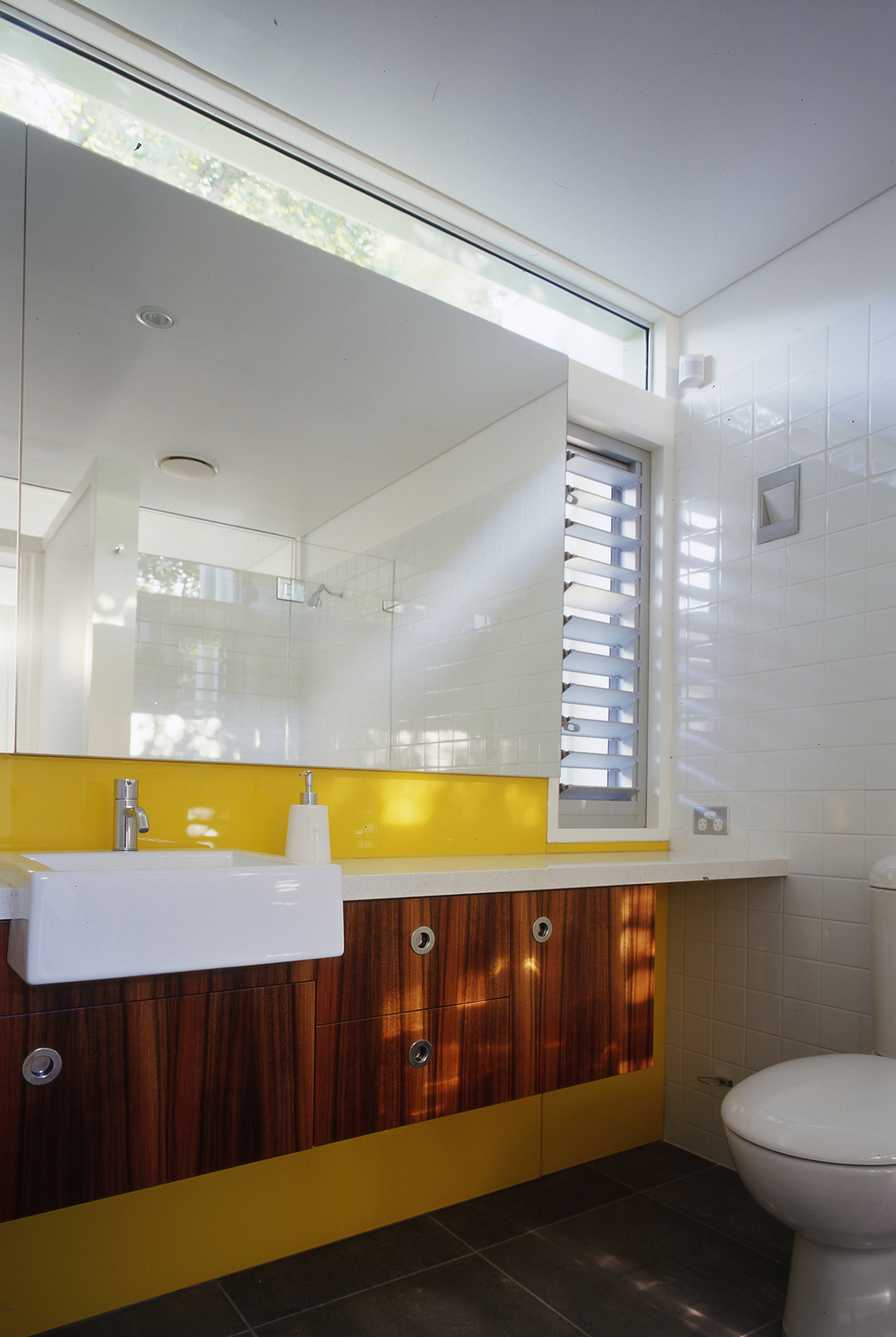 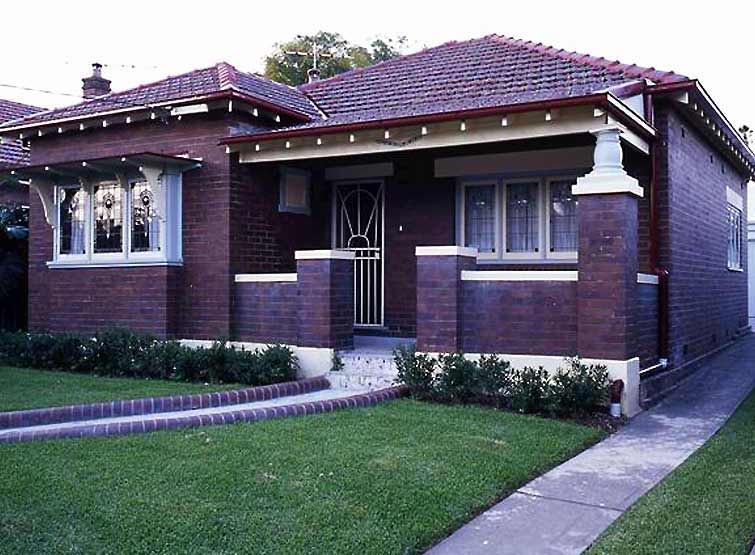 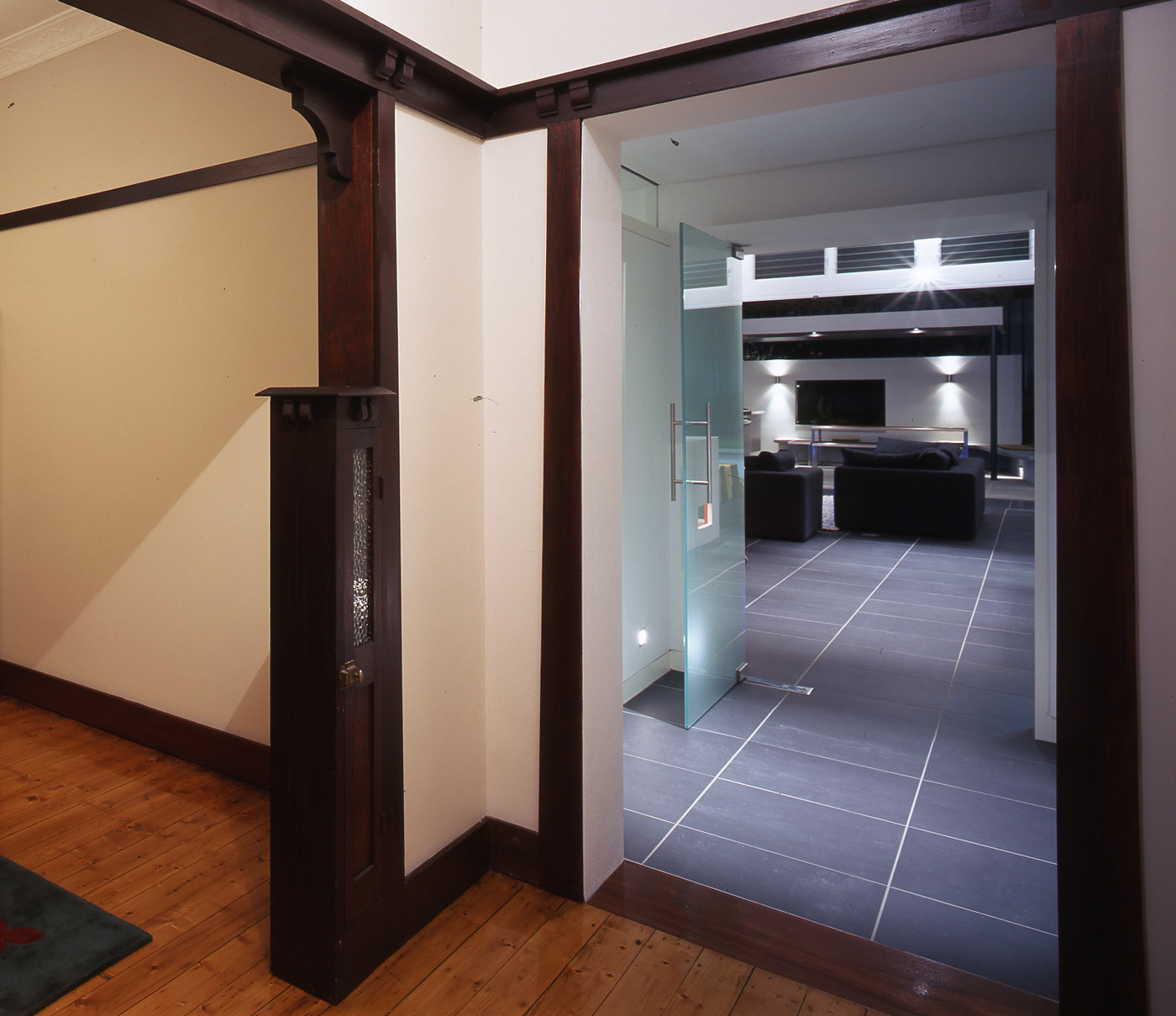 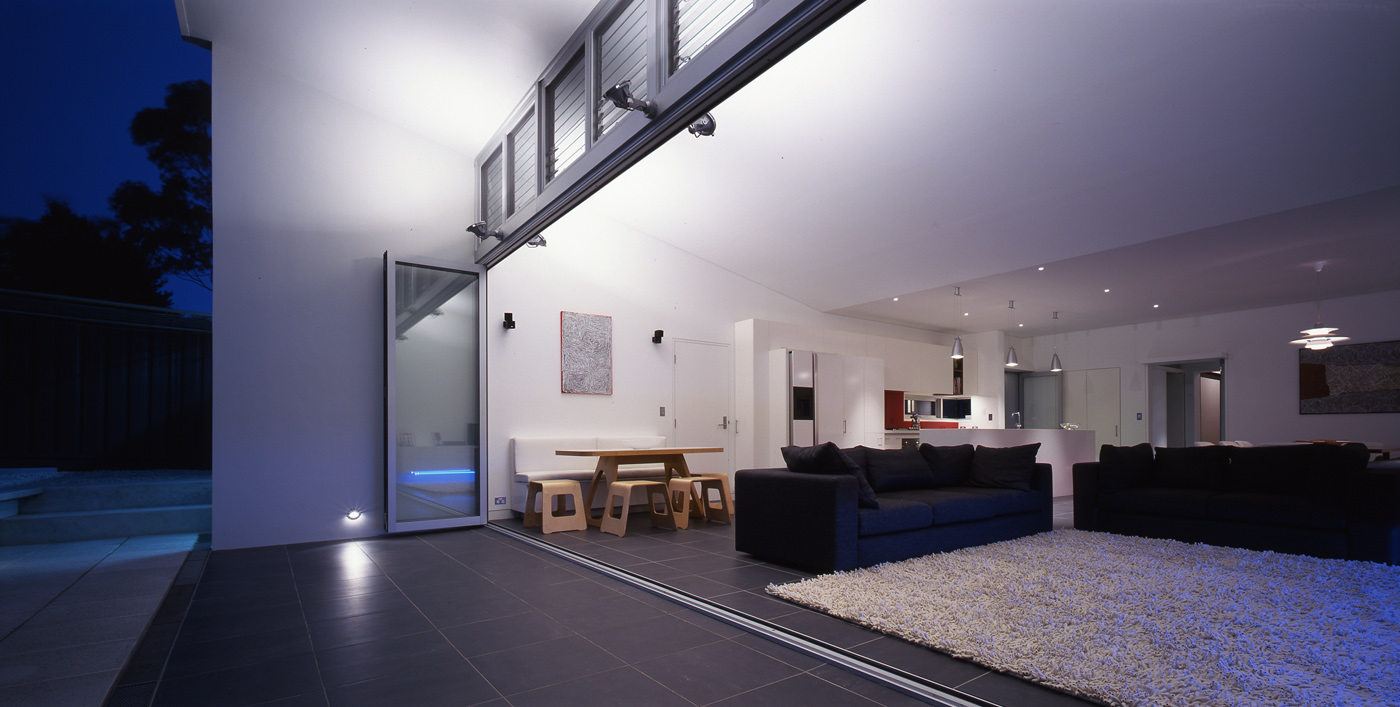 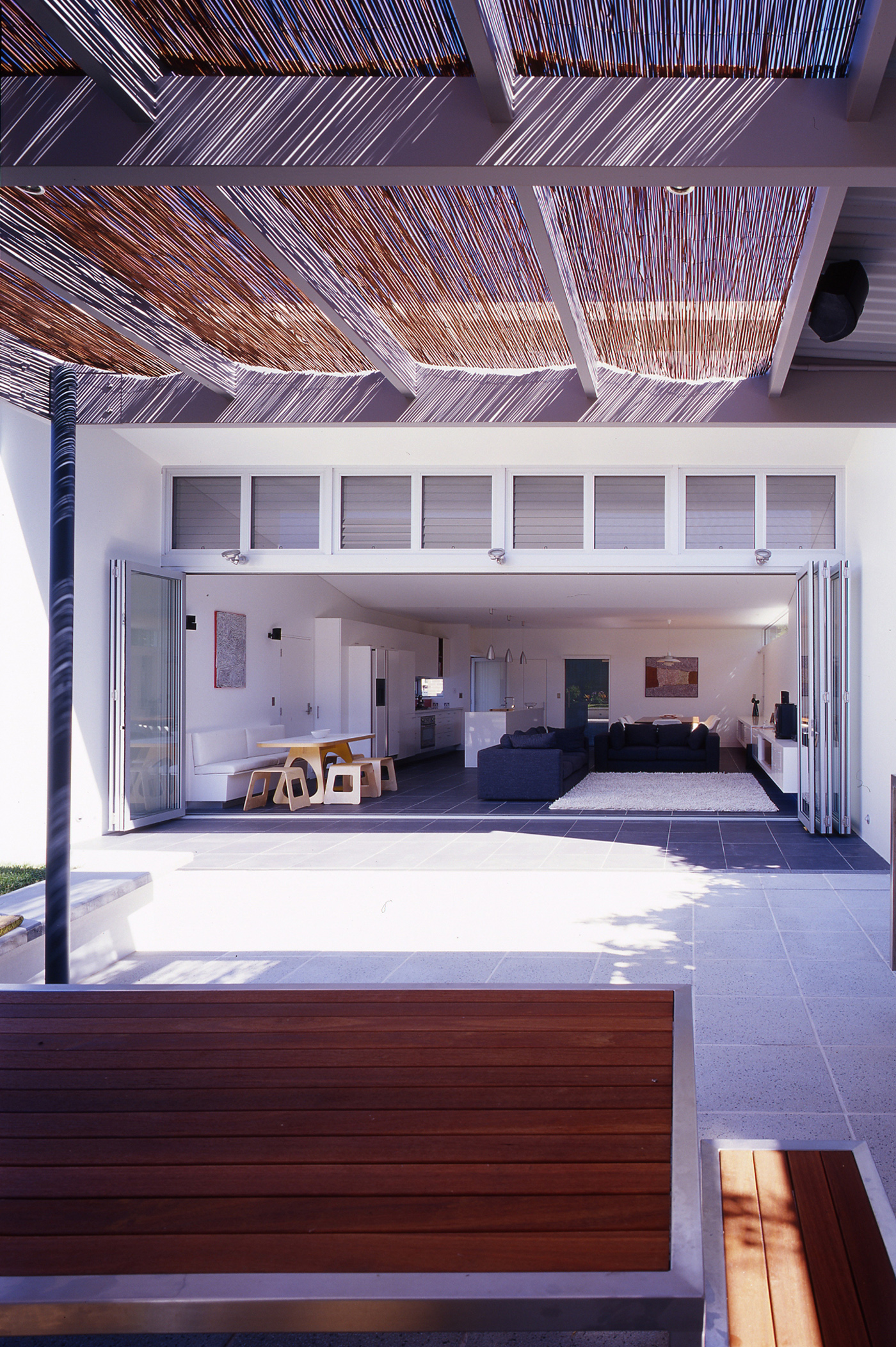