In collaboration with artist/ architect Peter McGregor and architect Gian Cerruti, we submitted a proposal for Laneway Art and City Spaces 2012, a part of City of Sydney Public Art Program. Each year, the City of Sydney invites teams of artists and architects to submit proposals for up to four temporary art installations.
Our proposal, HELLO GEORGE celebrates George Street as the original high street of the City and a major link between Central Station and Broadway to Town Hall and Circular Quay. All major cross city streets intersect with it and all main parades and popular city celebrations happen along George Street. In contrast to the civic qualities of Macquarie Street, George Street is the people’s street.
Four projects were proposed along its length, from Central Street in the south to the Woolworths Building opposite Town Hall, Curtin Place and Abercrombie Lane further north. All play on the name George, work at a grand scale and are experienced from George Street.

Our proposal draws upon the anamorphic works of Felice Varini characterised by its grand conceptual, spatial and urban scale. In the tradition of the false perspective, there is always a precise point of instant recognition, where seemingly disparate forms are given meaning by the visual logic of the greater whole.

Of the four sites proposed, the three streets will have their place of recognition in the middle of their pedestrian intersections with George Street. The fourth site will be on the axis of the Queen Victoria Statue, as she looks across the crossing towards the Woolworths Building. Each point requires a pause, an immobolised gaze, the stillness of which is heightened by the all-round perennial movement of pedestrians through the city.
We propose that further projects, such as George-gina, George O or By George could be sited from the Abercrombie Lane or Curtin Place thresholds. These would reinforce the idea of the project and give it greater spatial power befitting the scale and character of George Street and the City. 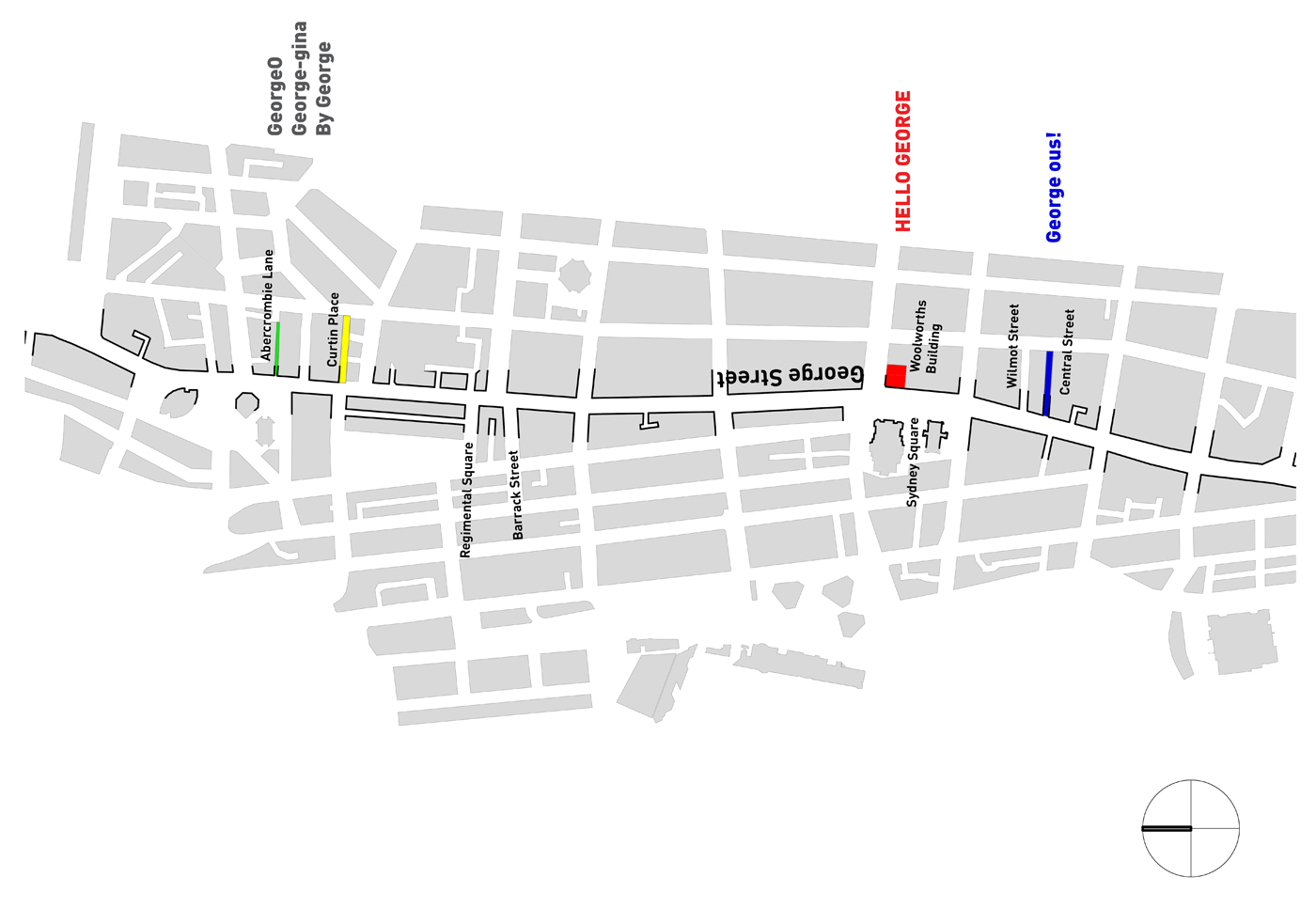 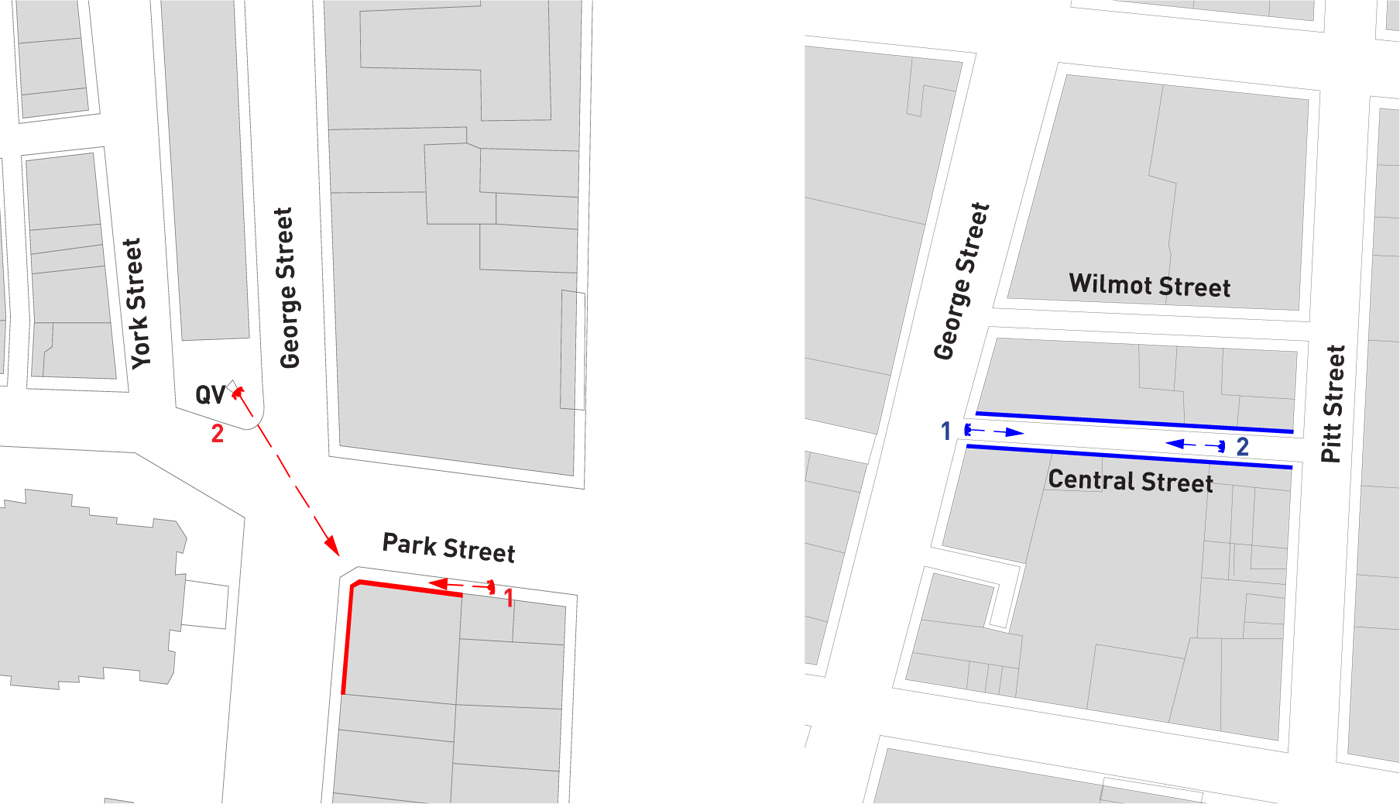 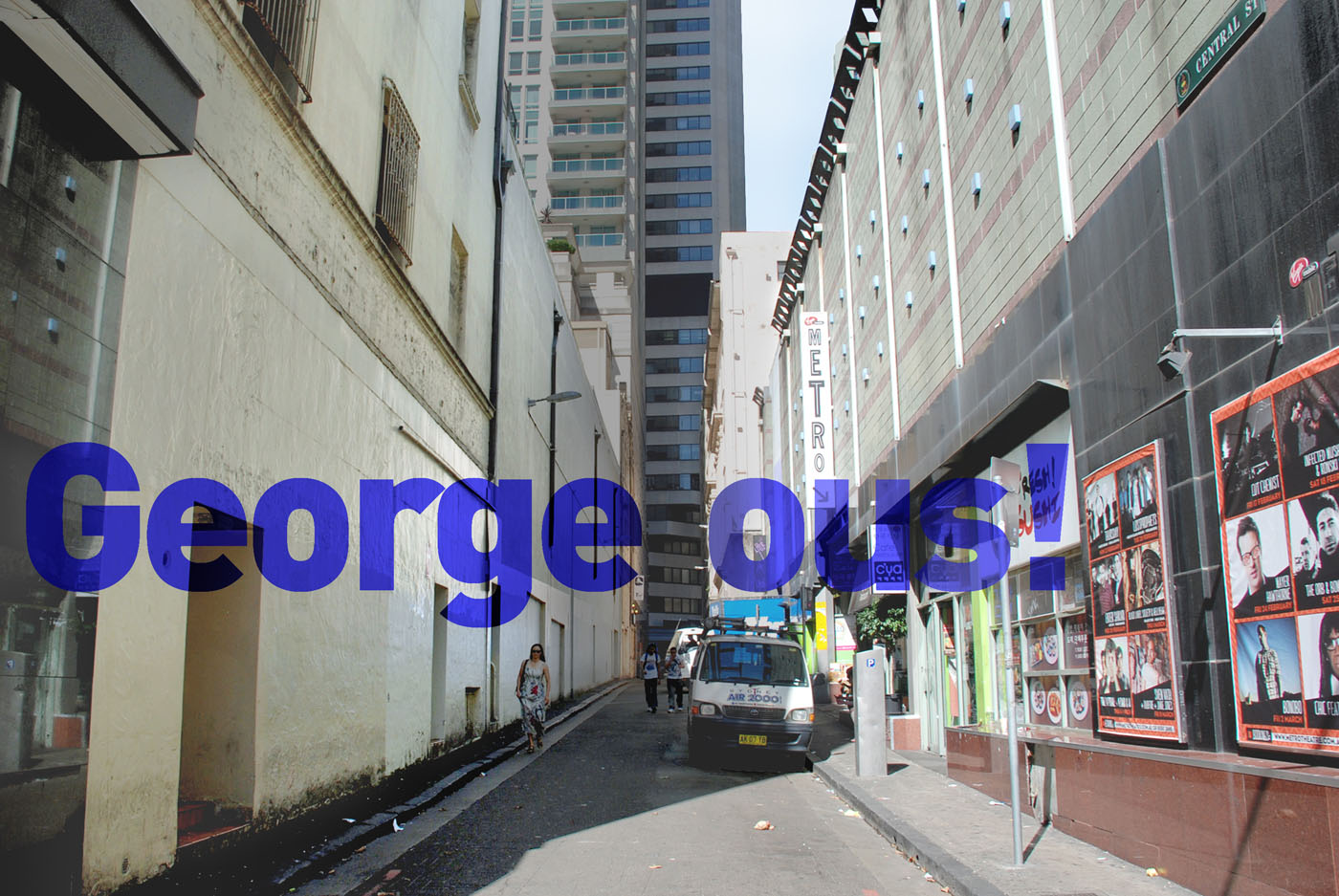 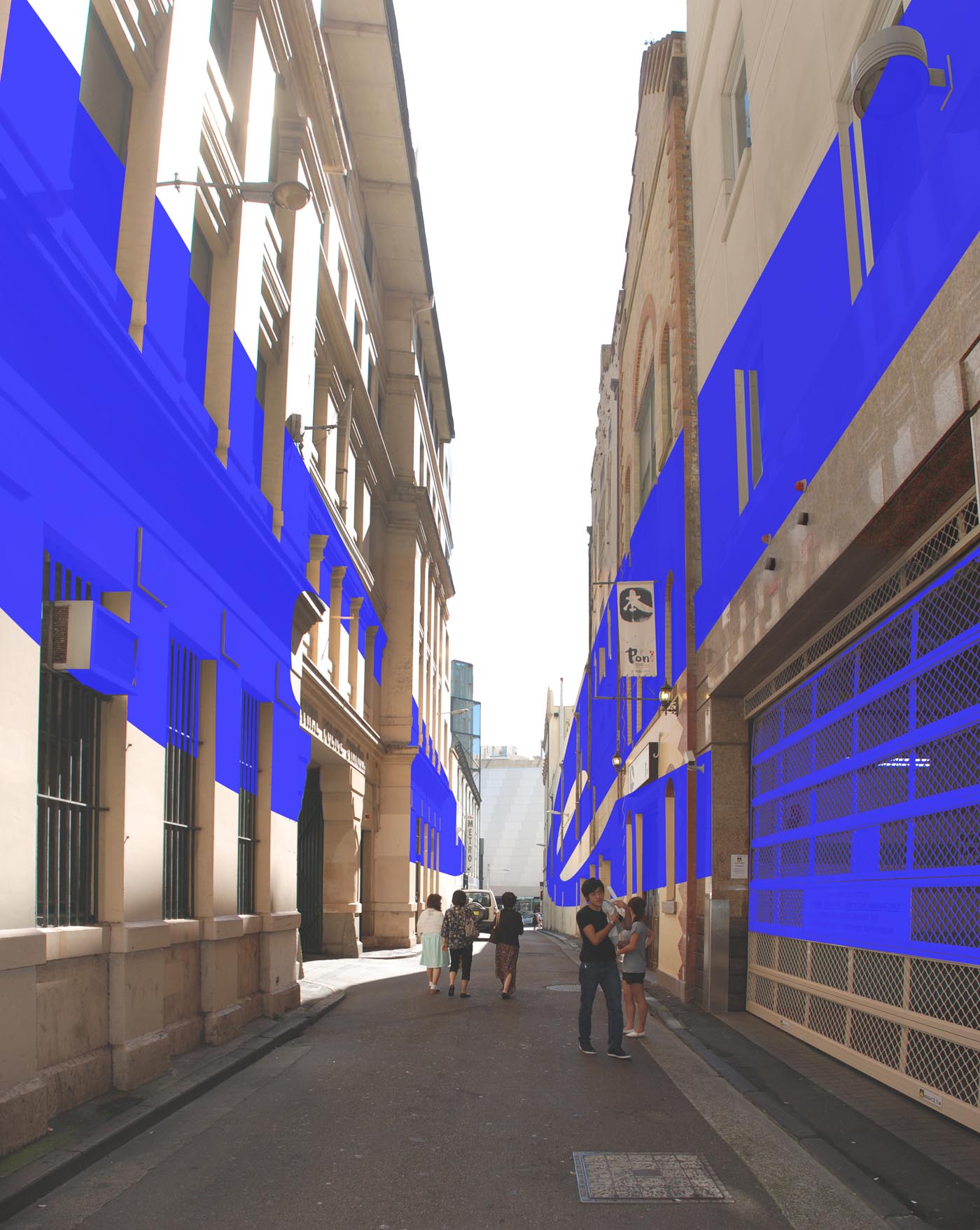 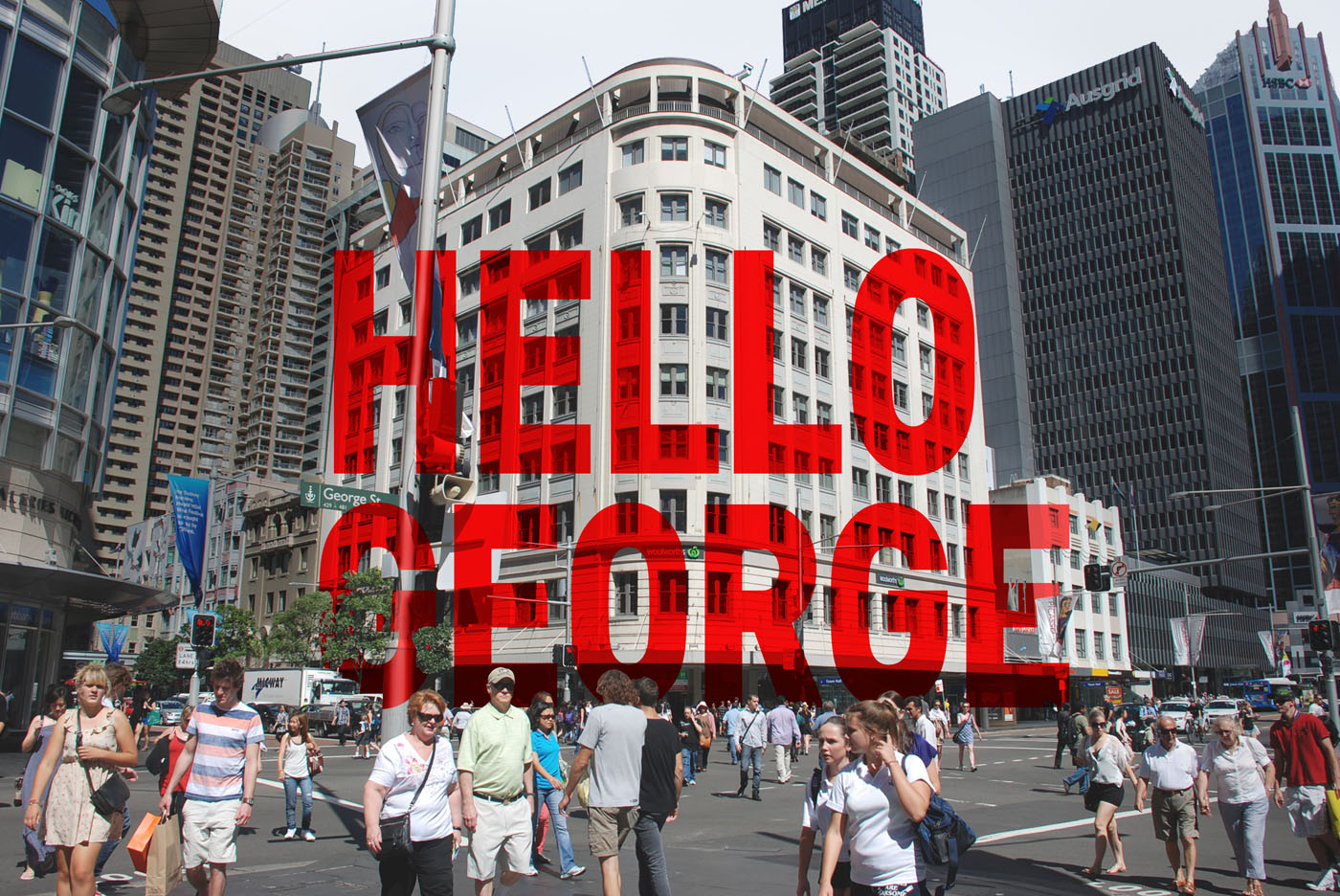 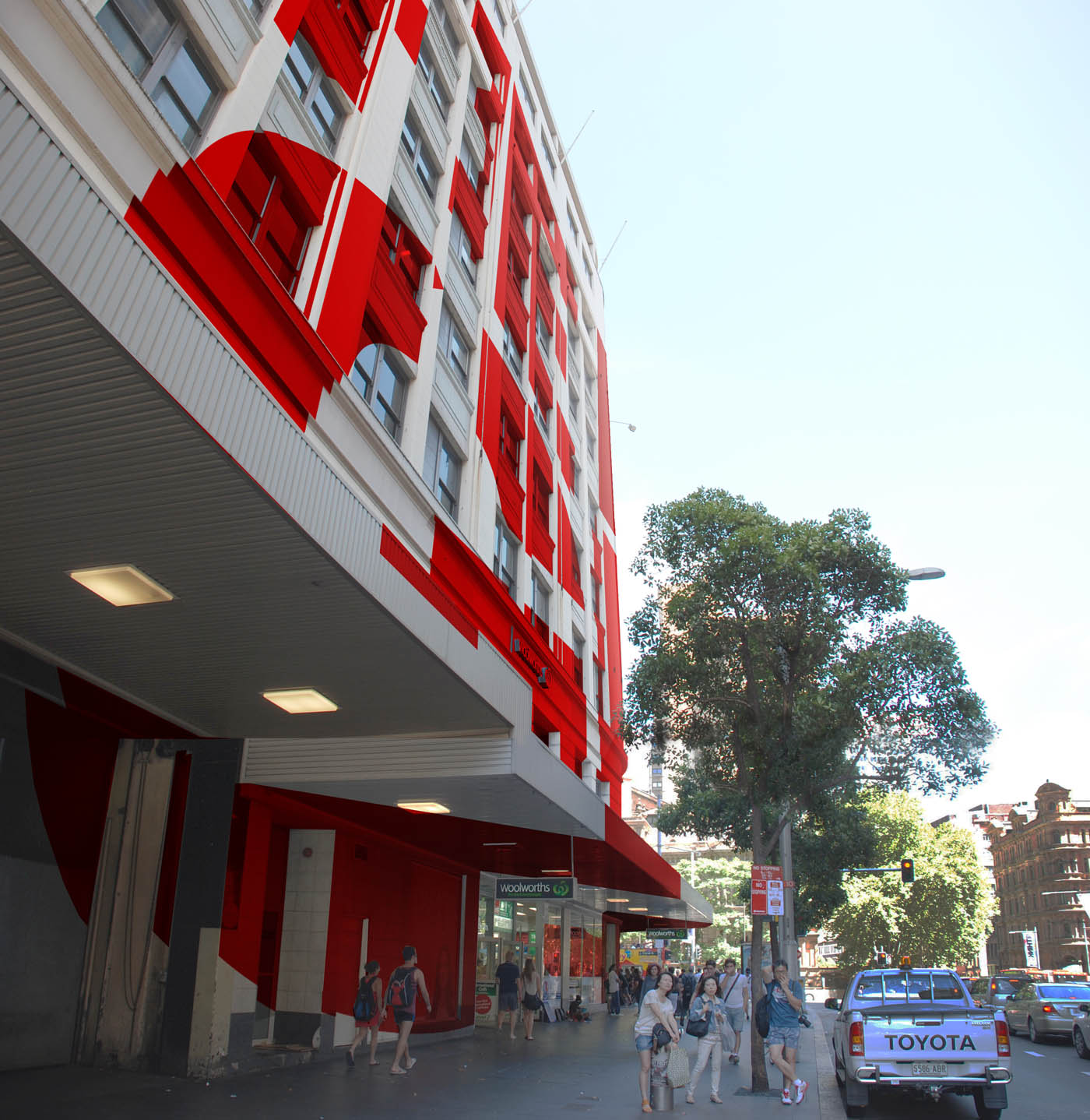