Findings from our Venice Biennale 2016 Tour

Sam Crawford Architects was awarded a trip to Venice as one of the winners of the Smeg tour Competition. As part of this trip, Sam, Jane and Chelsea were able to visit the 2016 Venice Architecture Biennale, an exhibition held every two years in the Giardini and the Arsenale, Venice.

On his return, Sam wrote the following article for Architecture AU about five of the exhibits that he found most clearly portrayed its creator’s message:

“In 2016, I experienced the Venice Architecture Biennale for the first time. It was also my first visit to Venice in 35 years. Both were enthralling, exhausting, delightful and testing. The sheer number of visitors crowding the streets of Venice appeared to test everyone, and the density of the biennale seemed overwhelming to many. The best exhibits spaced their ideas with clarity like written words, leaving visitors wanting more; the worst were unintelligible, leaving visitors wanting a comfortable spot for a nap. As one of the winners of the Smeg Tour Competition, I had two days to take a small part in the madness and get a taste of the plethora of ideas on display.

The most noticeable move of the German exhibit is to literally open up the building – a 1909 building that was modified by Ernst Haiger in 1938, and which has in recent years been labelled “Nazi propaganda” by its critics – by cutting large portals into the external walls. Given the heritage status of the building, this is a move as revolutionary as that made by Germany when it opened its borders to over a million refugees in the preceding year. But the really stunning thing about this exhibit is the thoughtful and clear exposition of the actions that the German people, architects and government and non-government agencies have made to house so many people in such a short time.

Danish pavilion – Art of Many: The right to space by Boris Brorman Jensen and Kristoffer Lindhardt Weiss

The curatorial team, made up of an architect and a philosopher, invited Danish architects to contribute models and prototypes demonstrating “their current efforts to create a humanistic architecture that influences people’s behaviour and promotes a sense of community.” It sounds a little dull and worthy, but what drew me into the exhibit was a quote on the wall outside: “Danish life is the Art of Many.” The exhibition is really an accumulation of very good work, rather than an exposition of a few stars. And there is so much good work happening in Denmark. According to the curators, “the authenticity and vitality of Danish architecture is founded and depends fundamentally on the good will and faith of Danish society in architecture.”

This is fundamentally about experience. It is an experience best understood in the context of the book of the same name, produced for the exhibit, but it is a wonderful experience regardless. I have no idea how visitors of other nationalities took it, but it gave me a sense of calm, evoked memories of distant timeless days spent around water and gave me a sense of thoughts stripped of complexity.

This exhibit tells a complex story in fascinating and direct way – through the images of the site and the building, some artefacts and a number of direct quotes from the local community. The building is a singular idea, a sequence of spaces in one line. According to Chipperfield, “there is nothing less appealing than a visitor centre,” and yet inevitably he makes it appealing.

Opposite the Chipperfield exhibit is the work of Kashef Chowdhury of Bangladesh. It is reached via a clear glass labyrinth. Four projects are displayed on little clusters of fine stands, each lit by a single pool of light. The work is materially restrained, spatially rich and inventive. The exhibition design is stunning. One is forced to bend over slightly to examine the work, concentrating the mind and somehow heightening the experience. If I had seen nothing else on my visit to the Giardini, I would have been satisfied with this.” 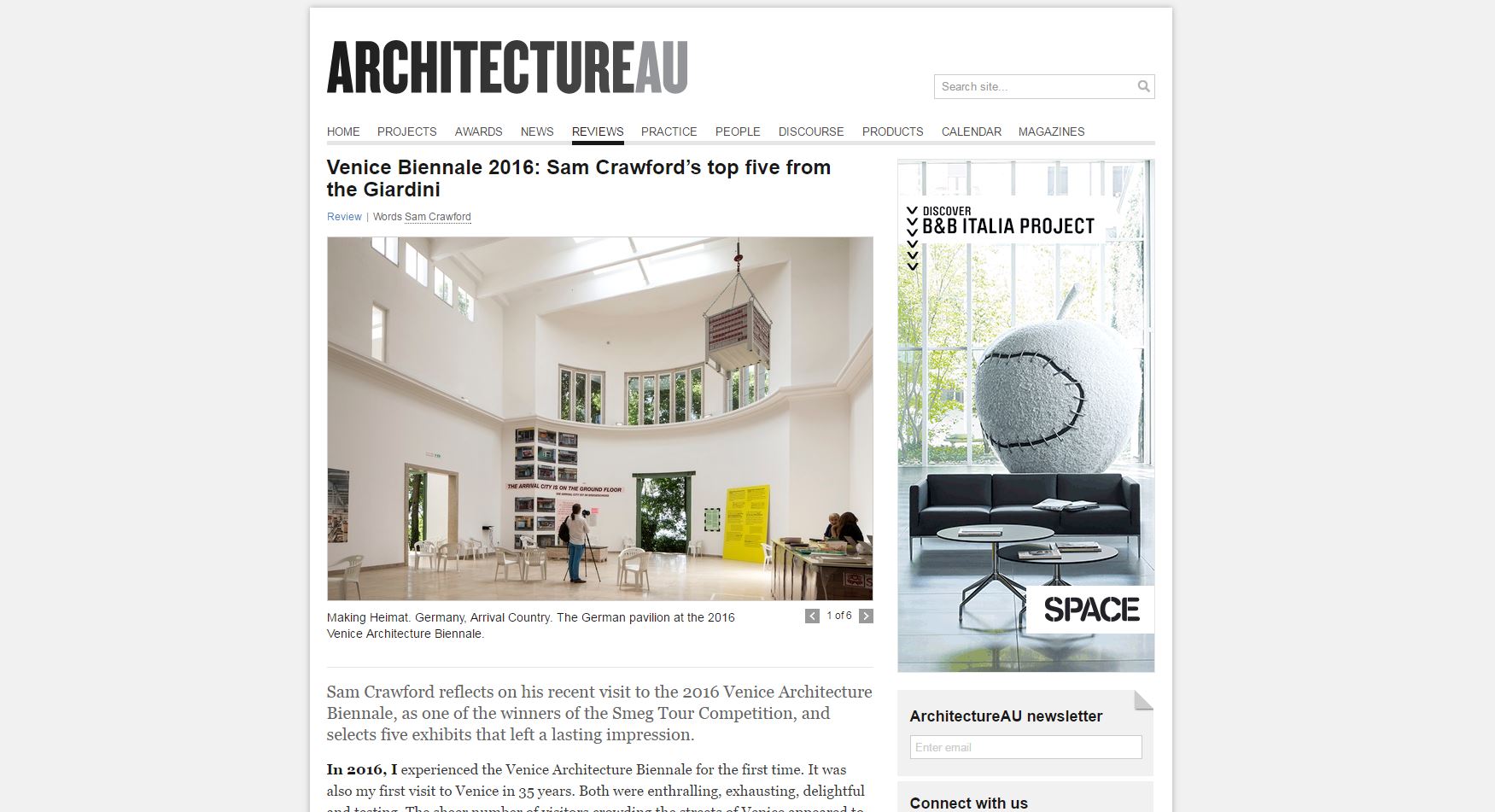